The time has come to show you another major kind of tiles that will be part of Pedion - and of any wargaming board I know of: the Roads...
In case you are following our facebook and twitter feeds, you may have seen that most of the Pedion™ prototype tiles are ready and configured into various wargame layouts. The Road tiles were some of my first prototypes but I am quite happy with their design parameters.

As with the rest of Pedion™ tiles, there will be tile designated as "roads", ie a part of the tile can be used as road by moving units, with any bonus this may grant depending on the ruleset used. What really sets the Road tiles apart is that they must be designed in a way to connect to each other and form a road network when the table is set. Also, there cannot be just one or two Road tiles in a full layout; there will be either enough to form a road crossing between two edges of the table, or none.

By selecting square tile shape, there are some limitations on road tile design. The roads must "start" from specific places on the tiles, in order to interchange them without problem. An obvious starting point is the middle of each tile's side. That means that the generated roads can only have 90 degree turns, intersections or crossroads. This is not as serious a handicap as it sounds, since most human made/designed roads cross at 90 deg (this was one of the main reasons I preferred square tiles to hexagons since they allow only for 30 degree intersections).  However, I intend to design a 30/60 degree intersection system to allow for such offshoots. 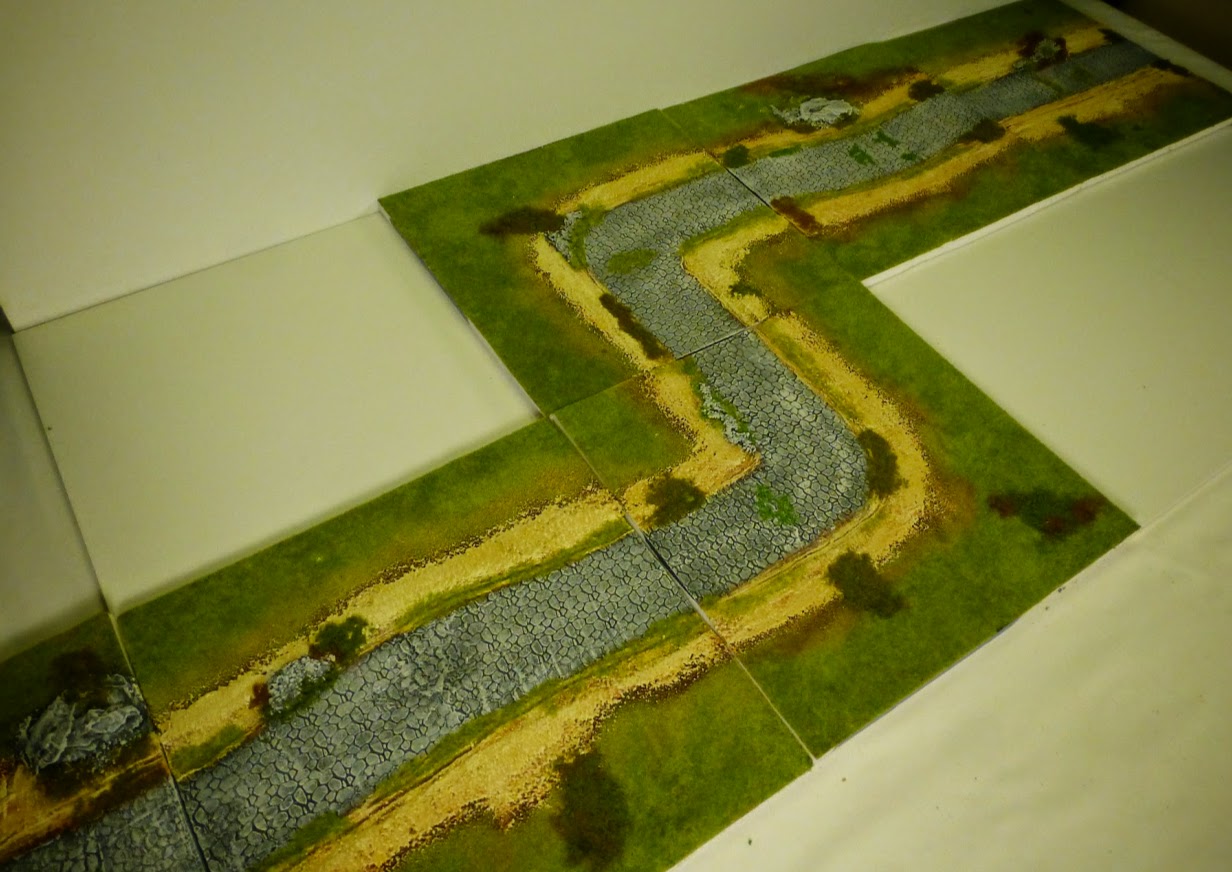 
Check out the road tiles in the pictures below:

The Road tiles can be combined in an almost infinite number of ways over your gaming table. The final result is both practical and realistic, since the roads do not "protrude" from the surrounding surface, but look natural in the terrain. However, their modularity capabilities do not stop there.

Real roads have trees or other features on their sidelines, or are usually followed by lines of fences. In many of my games I have used roads next to walls, hedges etc.
So I decided to magnetically enable the roadsides, in order for the players to place any magnet-based terrain feature they want next to them! Instead of predesignating walls, trees etc, you can place and remove features as you wish (or your gaming scenario dictates!). All the "dirt" area on the tiles is actually capable of holding terrain features like the trees I created for the forest tiles. I will let the video speak for itself...

The magnetized features in the video connect because the roadsides are painted with magnetic primer. In this case, the magnetic primer remained strong enough fro the magnets to connect. However it is possible to replace the primer with metal hardpoints at regular intervals in future iterations.

As I mentioned above, most prototypes are ready, and I think I have enough hard data to finalize design decisions and move to the next step: bringing Pedion to the world, that is, you. It is my intention to create a crowdfunding campaign for Pedion, in order to scope if there is actual interest, and what would people prefer for their terrain tiles.

The campaign will start rather sooner than later, since I am planing this for a long time, having made exhaustive calculations on manhours, development methods, costs, and shipping size & weight. I intend to make Pedion available in fixed, boxed layout sets, suitable for 3x3,4x4 and 4x6 wargaming tables, and allow each gamer to expand it by getting extra tiles as needed - check out a sample 4x4 layout including a river for your viewing pleasure :)

There are still issues to iron out, especially cost-wise, since the tiles seem to be more costly to make than I anticipated, raising the overall set cost. However, I believe the sets will be more competitively priced than other solutions out there. Also, there is still  the selection of the crowdfunding platform, since, while I would prefer KickStarter, it is a nightmare to start a campaign from a non-supported country, like Greece.

All these will be discussed in future blog posts, and of course over facebook and twitter. So, if you think you would (or know someone who would) be interested in being among the first to get a Pedion™ modular battlefield, follow us there. Also, I would really, really apreciate comments and ideas on the Road tiles, to make them even better!