Journal #2 - or, It seems that, in modular terrain tiles, Size (and Shape) Does Matter


Welcome to my second installment in this blog about the design process of Pedion (tm). Seems that people (you) liked what they have read so far, and I sincerely thank you for the warming response. In my previous entry I tried to lay down a series of requirements which will factor into development, like modularity, efficient storage, weight, durability, connectivity etc. So, in this and the next entries I will present how I try to address those needs -and others that arise and I did not foresee- while designing my modular terrain system, Pedion.

Again, I must point out that this is a work (or rather, a design) in process. Therefore, please do not take all you read or see in photos and videos for granted. They are prototypes, and may have already been discarded for a better idea. The purpose of all this, is for me to "throw" ideas at you and await for your input and counter-ideas..

In this post I will ramble on,describing efforts and decision regarding the actual tiles that comprise the wargame terrain: their size and shape. Let's get started, shall we?

Since the main purpose of a modular board is to try and interconnect many individual tiles into a greater battlefield, tile shape is critical. Tiles should all conform to a uniform shape to make it possible to connect to each other. So far, efforts in modular terrain have resulted in use of classic 2D geometric shapes, mostly hexagons (hexes) and squares. Circles are not considered a good choice since the cannot connect seamlessly, at least not without overlapping. I really tried coming up with a solution different from the more widespread one, but to no avail. I did entertain the thought of Octagonal shapes for a while, since they surpass some of the disadvantages of hexes and squares, but I found them even a greater nightmare to construct and (mass) produce than hexes. So I was left to decide between the traditional hex and the square (or rectangles in general).

Hexes are the first choice of many (mine included), especially for boards with small tile sizes. The tiles either keep the single hex shape, or they rest on a combination of hexes, like the Hexon system. Hex terrain derives from even the earliest boardgame wargames, although it cannot be easily used with them (the tiles should then be really, really small). They can be combined with wargames like Battletech, or those of the BattleLore/Command and Colors lines.


Their main advantages, apart from the wargaming look-and-feel, is the connectivity and the versatility their shape allows. They fulfill much of the Modularity Requirement, and they succeed in Connectivity. You see, their multiple angles allow the various tiles to stay together, one holding the other when resting on a table. Much like puzzle pieces, you can expect from hexes to keep each other in place, although serious pressure will move them. Also the six sides allow for more variations of interconnecting tiles along their edges, and also for six different orientations of the tile itself.

However, they present a number of disadvantages for me:
Not that the Hexagonal shape is out of the question for Pedion; it is just that I found out it imposed too many limitations when I started using it, and I abandoned it in favor of a rectangular solution. Yet, I consider it a great solution, especially for paper/cardboard flat tiles (which are more easily cut). So I find them great for solutions like GameMap, although they are too 2D for what I have in mind. If you still fill inclined to create hex tiles for your home board, do take a look at the excellent instructions by Maciej Marciniak at TerraGenesis
Squares (or more generally rectangles) are used in wargame boards of larger tile size, sometimes consisting only of 4-6 pieces. Not to overanalyze-it, square tiles have the reverse pros and cons of hex tiles: they do not stay connected as easily (thus the larger, heavier sizes), they offer a bit less variation and only four different orientations instead of six. On the other hand, they allow for 90 degree turns, though it is a design nightmare to implement 30-60 degree branches. But their many advantage is the easier process of cutting them with the necessary accuracy, making it simpler (and cheaper) to produce them. Also, they can be customized into variant shapes (like a rectangle or half-size squares) and still fit with larger squares. 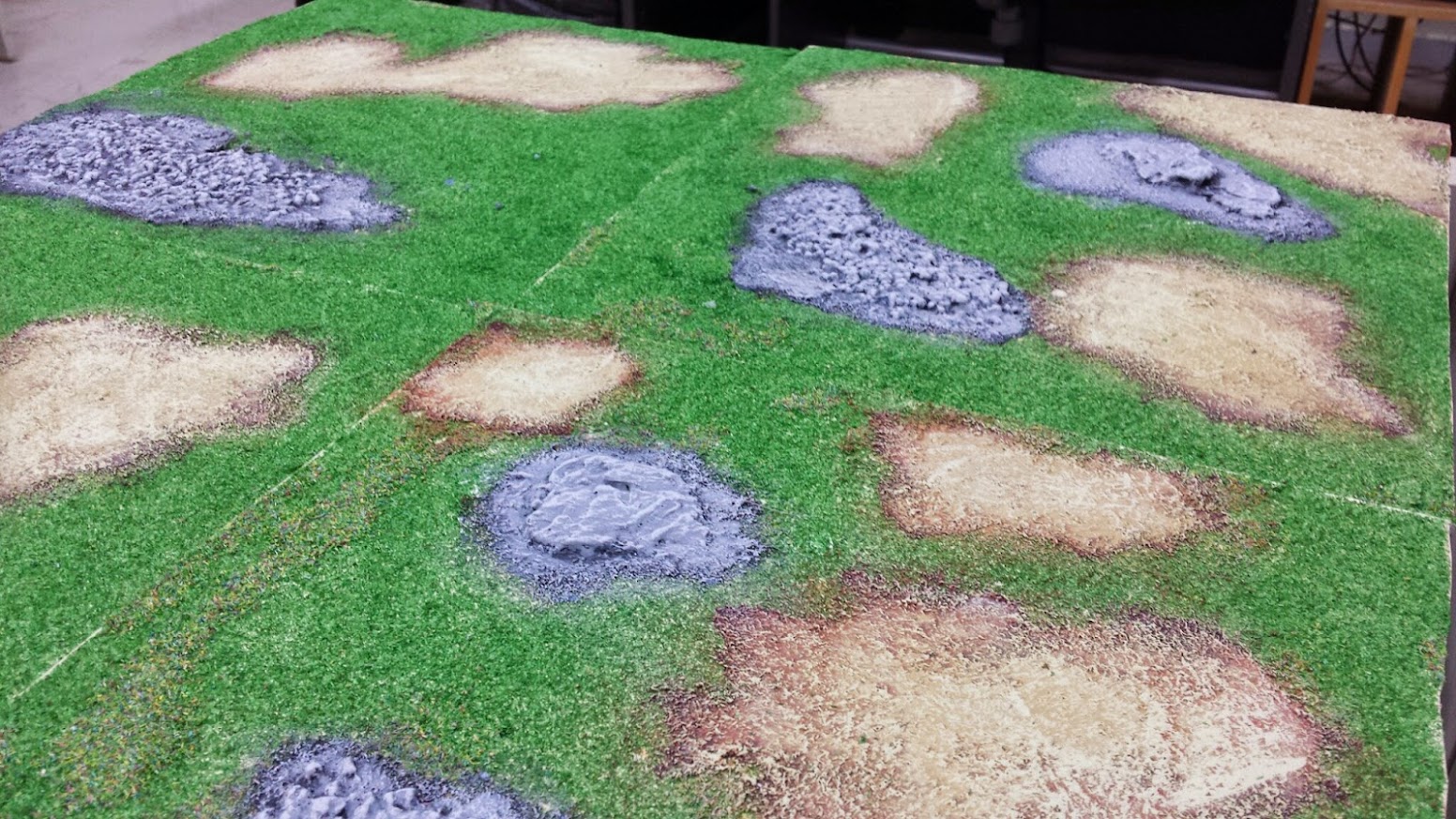 Taking all the above into account, I finally decided to go with square tiles for Pedion: they cover the Modularity Requirement quite efficiently, and they produce a board with less Seams than hexagons. Also, they would be much more easily designed and mass produced. My only variance from the norm regards their size, ans it will be presented below (feel free to comment on my decision below!).

And so we come into the great question of tile size, which is just as crucial. And size on a modeling/wargaming table is often dependent on the scale of the phenomena depicted, ie the scale of the terrain features and the models.  A terrain board is not strictly tied to a scale -or even a range of scales, therefore I did not included "intended scales" as one of the basic Requirements of Pedion. However, scale does play a part, especially in a modular system like Pedion where the various natural and man-made features are intended to be an actual part of the tiles.

Therefore, I believe I have to define a target scale range for the terrain depicted, to better facilitate the design process.  So, Pedion will -for the time being- be better suited for a range of scales, starting from the so called 15mm, up to the "heroic" 28mm. This range also includes the 20mm (or 1/72) scale as well as the 25mm scale used in many role playing sessions. Also, this range is still suitable for smaller scale 6mm games like Battletech, where the actual models are quite large. Why those scales? Well, I decided to go with the scales which I mostly play with, and I suspect are the most popular among wargamers. Since I am an engineer, I prefer the numerical expression of scales as a ratio, as it is better for design purposes. Therefore the official scale range starts from aprox. 1/100 (15mm) up to 1/56 (28mm).

So, where does representation Scale affects Size? Pedion will include many terrain features as a seamless part of each tile, not as extra pieces. So scale does not really affect grass or broken/difficult ground tiles so much, but it starts to play a part in feature tiles like roads, rivers, hills,forest areas, plantations etc. Still, it is possible to select feature sizes which will be logical and playable in the whole scale range. You see, the Pedion tiles will not include man-made features like buildings or walls - these are objects that are really scale depended. More natural terrain features can be represented in a variety of sizes. A 2.5 cm (1 inch) rock can pass as a 2.5 m (7.5 ft.) tall rock in 1/100 scale or 1.4 m (4.2 ft) tall rock in 1/56. Both sizes are logical, although the first would provide full cover, while the later could be designed also as half-cover between players. The one man-made feature that will make it into the tiles is the roadway. There it is crucial to select a roadway width which will make sense in all scales involved; more on this on a latter blog post about roads!

Taking into account the features represented in Pedion tiles, I wanted to pick a tile size that will allow features to be crowed (for smaller scales) but still be large enough for a large scale (20-28mm) battlefield.

One of the good things of going with a rectacular, square tile shape is that I can always design smaller, "filler" tiles in future, with smaller, more crowded features on them - and give those smaller scales (6-10mm) a go...

Here is a picture of the Pedion tiles in their first implementations (the tile is made from foamboard, which I rejected as a base material in a later stage).


So this concludes my decision making on tile size and shape. I believe they cover at a satisfactory degree my Requirements of Modularity and Efficient Storage, while they also succeed in Appearance and Level landscape. However I would greatly value your input and experience!

My next post will be about materials and connectivity between the tiles - but you can have a sneak peak at a prototype tile in its most developed form in the photo below! Please do comment and share with people who would be interested in Pedion. Also, to avoid  overly spamming you with updates, you can join the Pedion facebook page to keep in touch. 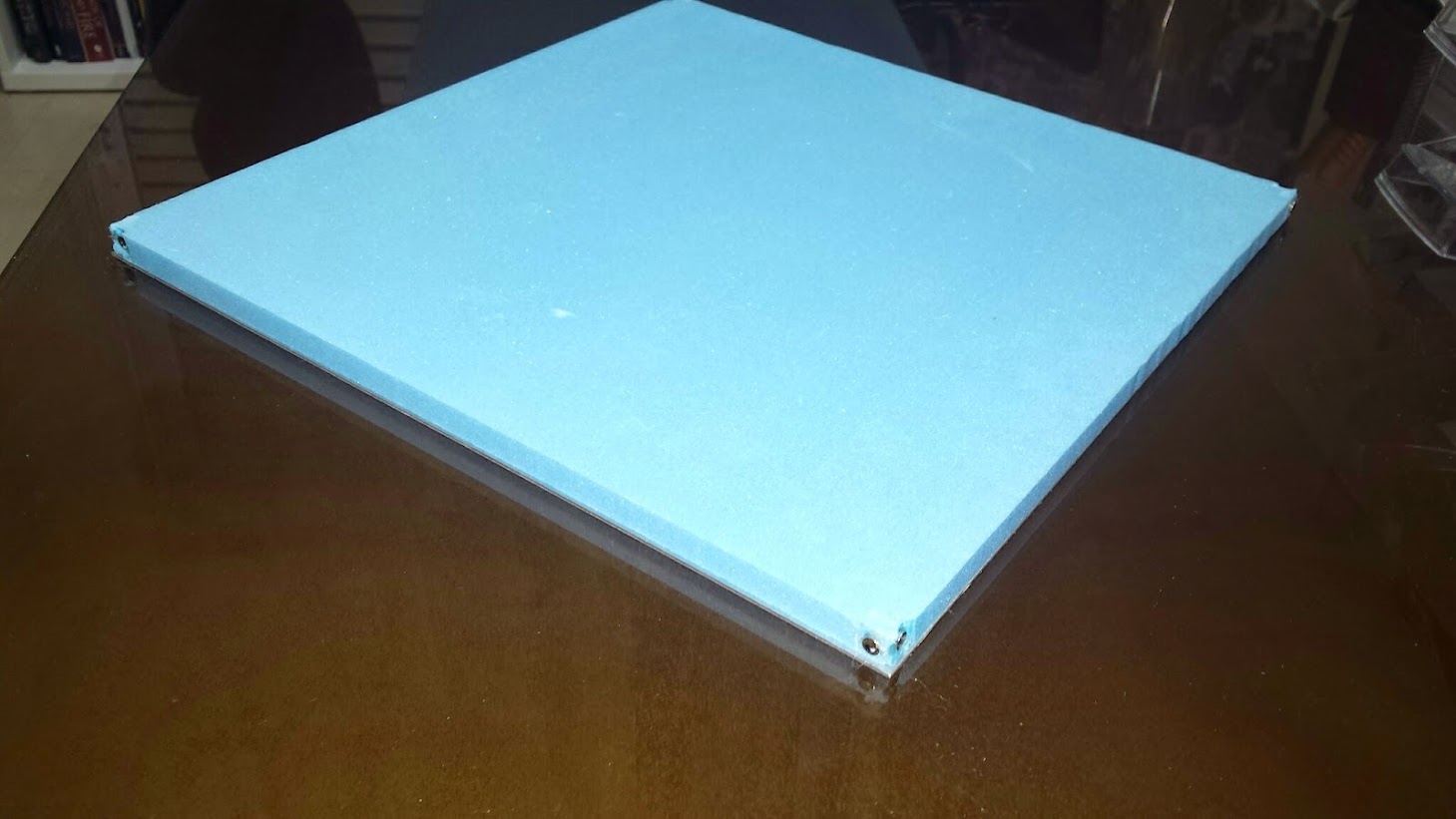